Domestic and Exotic Hardwood is Spilling Off the Shelf

Got Wood? Yes we do!

What happens when a woodshop goes out of business? Several loads of new (old) wood is coming to Eco Relics! When the first load arrived, the Eco Relics craftsmen had thoughts of hoarding it for their own projects. But when the second, third, and fourth loads arrived, it became clear that there is plenty to go around. Domestic and exotic hardwoods are spilling off the racks! Here’s some of what we’ve identified so far: 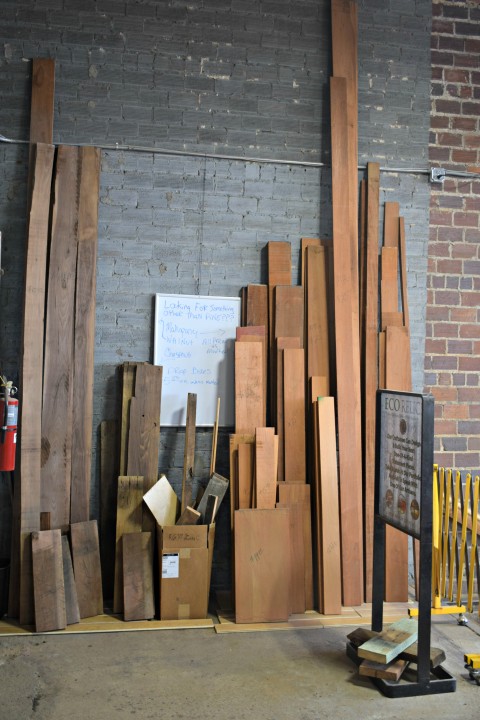 Mahogany is an exceptionally straight, fine, and even grained hardwood native to South America. It is unusually dense and mostly free of voids and pockets. Beautiful colors vary from reddish brown (a reddish sheen is exposed by polishing) to dark brown, and the wood usually gets darker with time.

In colonial days, mahogany was reserved by royal monopoly for boat building, owing to its rot resistance as and durability. Here, the colonists were borrowing from local practices after observing Arawaks build mahogany canoes in Hispaniola in the 17th century. Today, mahogany is prized as a tonewood for musical instruments. Acoustic guitars use mahogany for backs, sides, tops, and necks. Drum shells made of mahogany are usually deeper and warmer sounding than their maple or birch counterparts.

Doug and Billy collaborated on this beautiful table made from mahogany and oak salvaged from a broken piano. 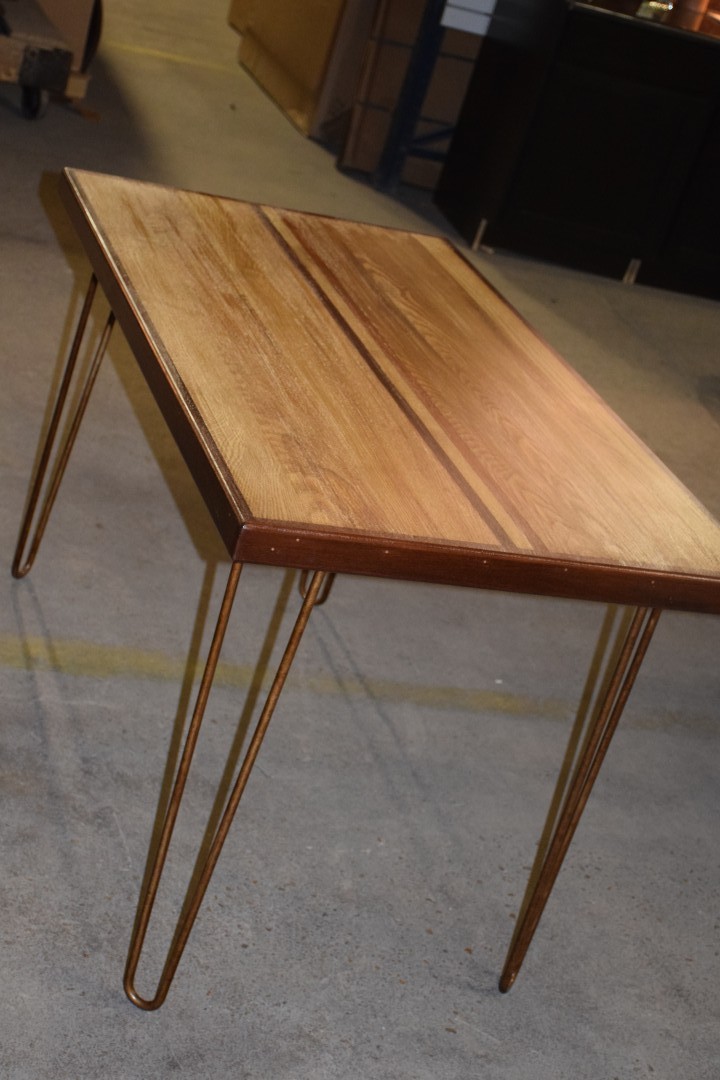 In the early 1900s, blight wiped out nearly all of North America’s mature chestnut trees. Caused by an invasive bark fungus, the blight turned chestnut from the most logged American hardwood into a rare commodity only acquired by salvage, usually from deconstructed 17th and 18th century barns in North Carolina, Virginia, and Pennsylvania.

In colonial days, chestnut was the hardwood of choice for utility purposes like beams, floorboards, and furniture. Chestnut is easy to work with hand tools and is not hard on machine tools. It is a very stable wood with a striking color range from pale honey to dark amber that finishes gorgeously.

Check out this chestnut desk that Doug made: 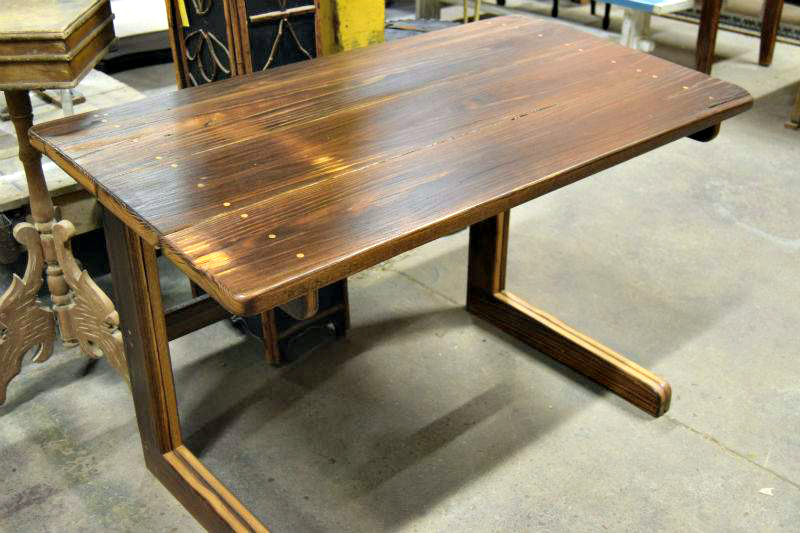 Walnut’s incredible hardness, figured grain patterns, and rich coloration make it one of the most popular domestic hardwoods for fine furniture, cabinetry, paneling, and veneers. These characteristics, as well as its suitability for turning and steam bending, have made walnut a premium domestic hardwood for woodworkers.

Walnut is also a favorite choice in musical instrument construction and is often found in pipe organ cases and traditionally constructed stringed instruments like the dulcimer. As the market for exotic hardwoods becomes less predictable, guitar makers are using walnut more frequently. The Gibson J15 is constructed entirely from North American woods, including walnut back, sides, and fingerboard.

We’re still getting it all sorted. Just now, Doug told me that the following boards are also part of the bundle: 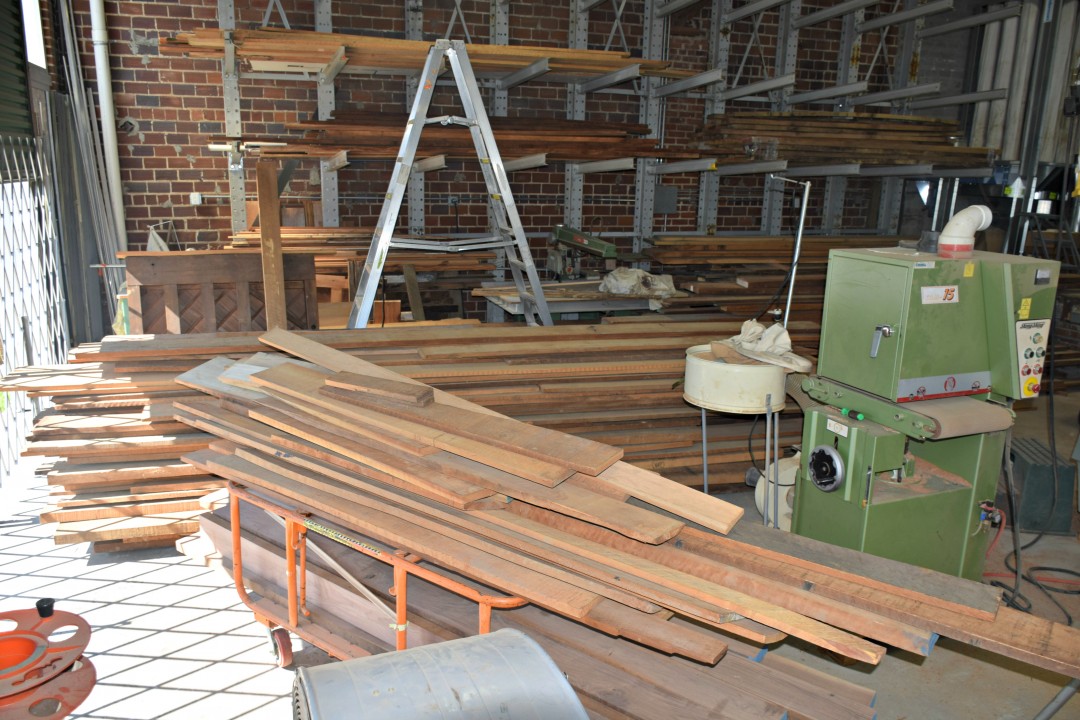 Awesome! What is the price per board foot for these woods? Will you plane them to a certain size? Do you have a jointer to make jointed edges for gluing?

Yes, we offer the services you are asking of, but I suggest you come in and talk with our fabricators. They’ll be able to walk you through our materials and give you a quote. They’re in the wood shop 7 days a week. See you soon.

Thank you for inquiring

See my Facebook comment about Eco Relics, too. I thoroughly enjoy David’s newsletter! One really has to visit the store to truly appreciate the great salvage items and the wide variety of wood. Eco Relics is a true gem… jacksonville’s answer to Salvage Dogs and American Pickers!

Looking for some rough cut wood to finish the walls of a small barn I’m renovating. I’m on a budget. What wood do you have in 1″ thick or less, the wider and longer the better? How about the poplar you have listed? I need about 500 sq.ft.
Thanks,
Peter Evenson
(904)327-4239

Come on in, we’re always purchasing lumber and have plenty for you to chose from in the warehouse.

Thank you for inquiring