Made in Chicago at Eco Relics

The Cubs won the World Series! We’re celebrating the great American city of Chicago this week, sharing in the revelry built by over a hundred years of anticipation. Chicago has long loomed large on the American consciousness, sharing with Jacksonville the distinction of having been nearly burnt to the ground by fire at the turn of the century, only to recover in short order as regional economic power stretching its influence internationally. As a
manufacturing center, Chicago has sent its wares all over the globe, with many antique and vintage items landing at Eco Relics. Let’s take a look at a few of the items in our warehouse that bear the iconic seal: Made in Chicago. 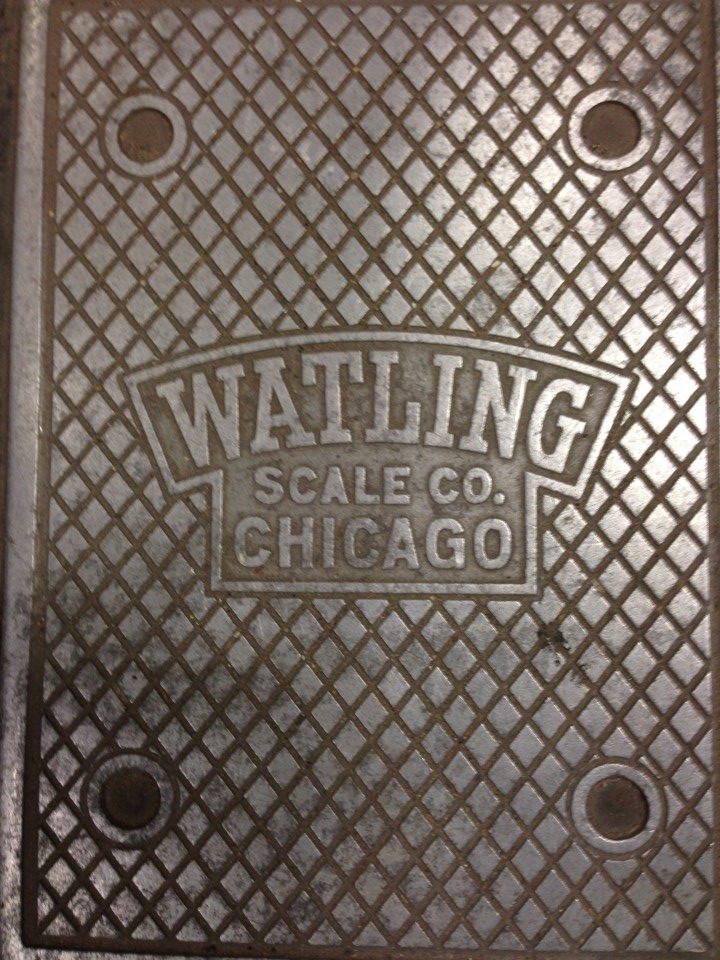 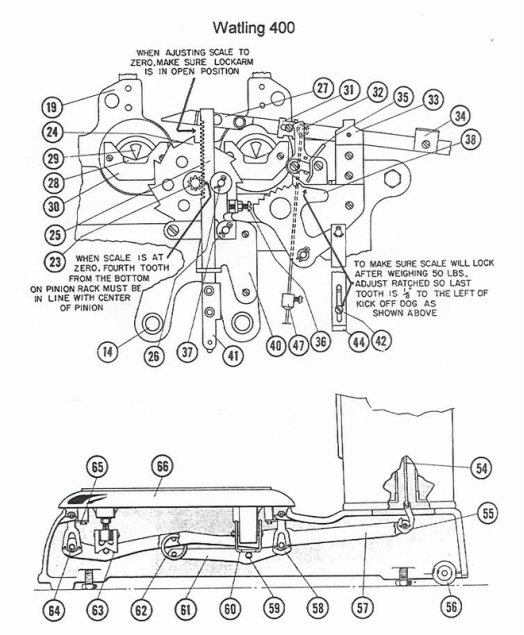 The Chicago Watling Scale Company opened in 1889, manufacturing various coin-operated machines. Although the company is now defunct, the old Watling factory is still standing at 4650 West Fulton Street in a part of Chicago’s West Garfield Park neighborhood known at “K Town.” Watling moved into the now-shuttered 26,000 sq ft building 88 years ago just before the Great Depression. Served by the Green Line’s Cicero station, originally constructed in the Queen Anne style like other stations on Lake Street, the neighborhood was home to several manufacturing operations in the decades around the turn of the century. Just a block away, Brach’s candy factory relocated to the area in 1921, producing over 2 million pounds a week of 127 different varieties of candy.  Eco Relics’ Watling scale has been in Florida a while, bearing a Marion County vending license for the years 1965-66.

Chicago’s own Bally Manufacturing has roots in the Great Depression, when entrepeneurRay Mononey started the Lion Manufacturing group to produce a penny-a-play pinball machine called the “Ballyhoo.” 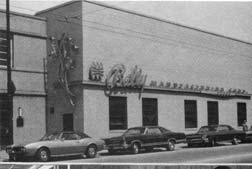 n adopted the Bally name and  in 1935 moved from its original location to a new plant on Belmont Avenue, just west of the Chicago River in the Avondale neighborhood on the city’s north side. Avondale began as an integrated village in rural Jefferson Township before being annexed by the city of Chicago in 1889 as the area underwent an urban transformation. Eco Relics’ Bally slot machine is a reminder of the company’s foray into the gambling world, including ties to notorious mobster Meyer Lanksy. Today the Bally name survives, but manufacturing of slot machines has moved to, where else, Las Vegas. 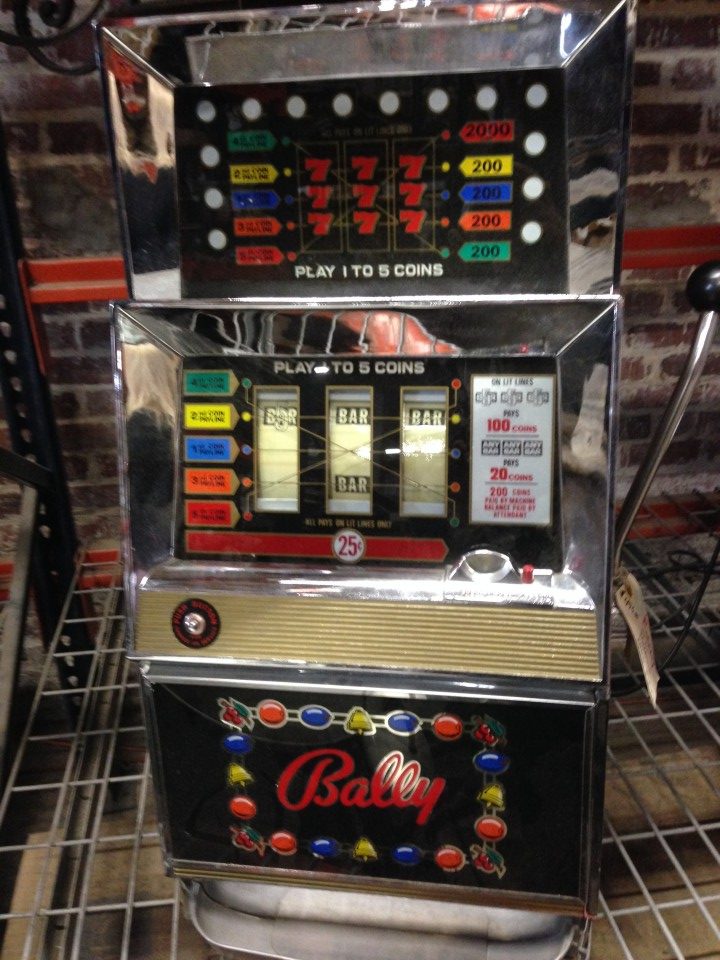 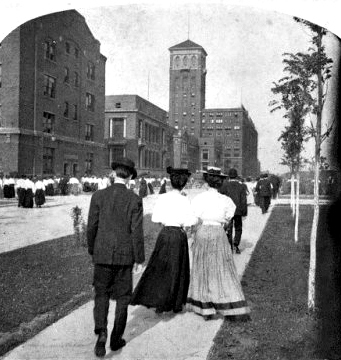 Perhaps Chicago’s biggest business resident is the Sears & Roebuck company. Their famous mail order catalog supplied Americans with everything from watches, the company’s first product, to kit houses. A few Sears and Roebuck kit houses still stand in Jacksonville if you know where to look. In 1906, the Sears Merchandise Building Tower opened in Chicago’s North Lawndale neighborhood on the westside, walking distance from the Watling Scale Company in K Town. The same year, Sears began offering tours through the building, as well as the advertising building, administration building, and the Sears power station. Take the original tour here! By the 1940s, the sprawling campus also included a testing laboratory, 3.3 million sq ft office building, fire department, newspaper office, cafeteria,  and bank. The second Sears Tower, an iconic 108-story skyscraper, was completed in 1973, but the company moved to the suburbs in the 1990s. Eco Relics usually carries a variety of items from the Sears catalog, including safes. 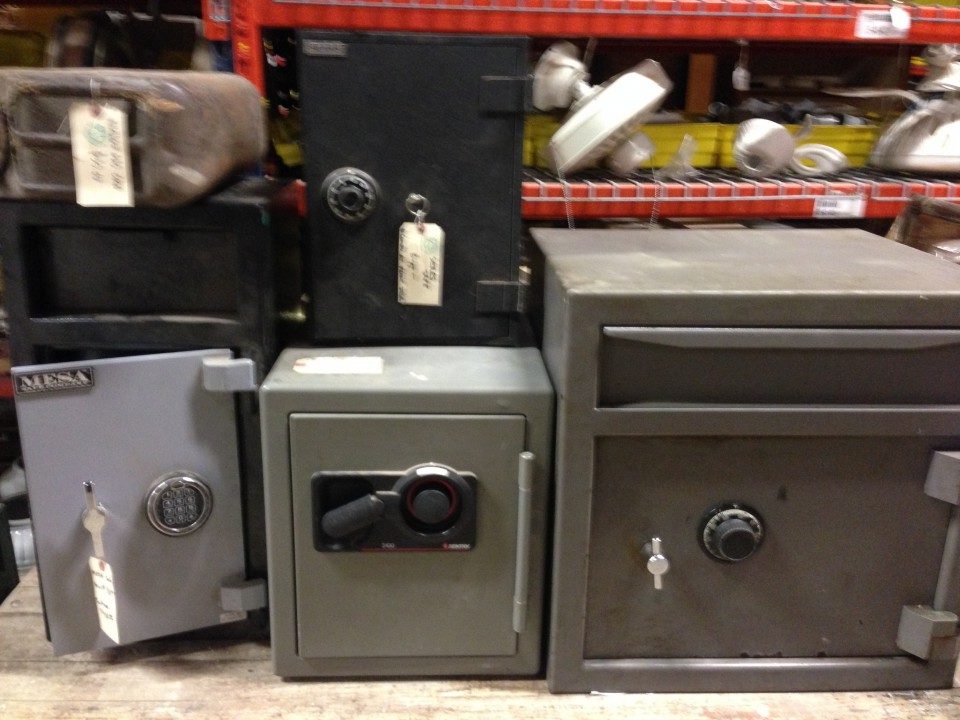 aster company is another Chicago original. Its checkwriters were once ubiquitous office paraphernalia, the brand name becoming synonymous with the product, like croc-pots and q-tips. The company got started in the 1930s, moving to a factory in the Ravenswood neighborhood on the northside in the 1950s, not too far from Wrigley Field. Paymaster’s union-busting activities earned a reprieve from the NLRB in the 1960s, revealing the cartoonishly fiendish personality of founder Theodore B. Hirschberg, Jr., who actually spied on workers from the bushes outside the company gates as they left work for the day. The factory’s Winnemac Avenue address eventually became high dollar real estate. It was demolished in the 1990s in favor of walk-up apartments and Paymaster moved to the suburbs. Our 1960s era Paymaster X 550 is a piece of mid-century modernism made in the good old Windy City, mecca of the style. 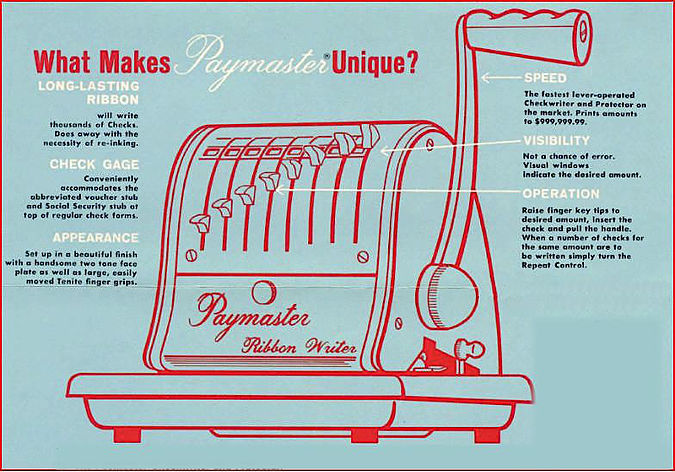 Not enough made-in-Chicago for you? Check out the Made in Chicago Museum!